The National Historical Commission of the Philippines has approved the installation of a historical marker to honor the late World War II patriot Antonio Julian Montalván.

Signed by Dr. Rene R. Escalante, NHCP Chairman of the Board, the approved text in Pilipino reads: 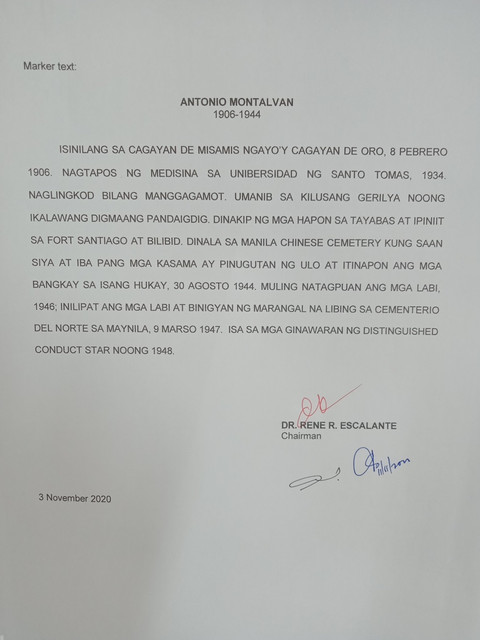 Antonio Julian Montalván y Corrales (Feb. 8, 1906 – Aug. 30, 1944) was a member of an espionage team as G-2, MC Liaison and Intelligence Officer, of the 10th Military District under Col. Wendell W.  Fertig in Mindanao, who reported directly to Gen. Douglas MacArthur.

“He was a medical doctor, first assigned at the Misamis Provincial Hospital (now the Northern Mindanao Medical Center), then to Cebu, then Palompon in Leyte,” said his namesake and nephew anthropologist and columnist Antonio J. “Nono” Montalvan II. “He later served as public health doctor in Iligan.”

When the war began, he was the personal medic of Col. Wendell W. Fertig, head of the organized guerrilla resistance in Mindanao under the 10th Military District, United States Forces in the Philippines. He was recruited to serve as a spy by their cousin and brother-in-law Senator José Ozámiz.

Montalván first served as courier between Manila and Mindanao. The boat would land in Pagbilao, Quezon near Tayabas. Then he would proceed to Manila to get in touch with the Manila spy network (Spyron).

Then newly married to Rosario Llamas, a cousin of Virginia Llamas Romulo, — the first Mrs. Carlos P. Romulo—he was arrested by the Japanese Kempeitai in Lucena, Tayabas town, in the house of his mother in-law Doña Tecla Capistrano Llamas. He was about to pack his bags for another clandestine boat trip to Mindanao after completing three successful trips when he was betrayed by one of the carpenters working in house.

The Japanese later detained and tortured him in Fort Santiago and at the Old Bilibid Prisons in Manila.

On August 30, 1944 he was executed by decapitation with the group of Senator José Ozámiz, and the Elizalde Group of Manila which included the writer Rafael Roces and Blanche Walker Jurika, the mother in-law of guerilla leader Charles "Chick" Parsons. The execution took place at the Manila Chinese Cemetery.

One of the perpendicular streets which links Burgos to Apolinar Velez streets in Cagayan de Oro City has been named in his honor.

“The Second World War produced thousands of heroes but very few of them were known,” Aguilar notes.

“Unlike in the Philippine Revolution and Fil-Am War where the concentration of large-scale fighting was in the 8 provinces around Manila, with some in various provinces, resistance to Japanese invasion and occupation was from Batanes to Tawi-Tawi.”

“After the war, there were over 400,000 guerrillas who were recognized. Add to these the over 100,000 who died fighting for our country. This was a big percentage to our population which was 18 million at the outbreak of war.”

“Every veteran who fought for our country’s freedom are heroes that we must treasure. We are the beneficiaries of their sacrifices for fighting for the freedom we enjoy today. Their investment was their blood, sweat and tears.”

“It is time for us to rediscover the unsung and unknown heroes in our family and we will be surprised to know that we have the blood of heroes in our veins. It is our duty in this generation to honor our heroes.”