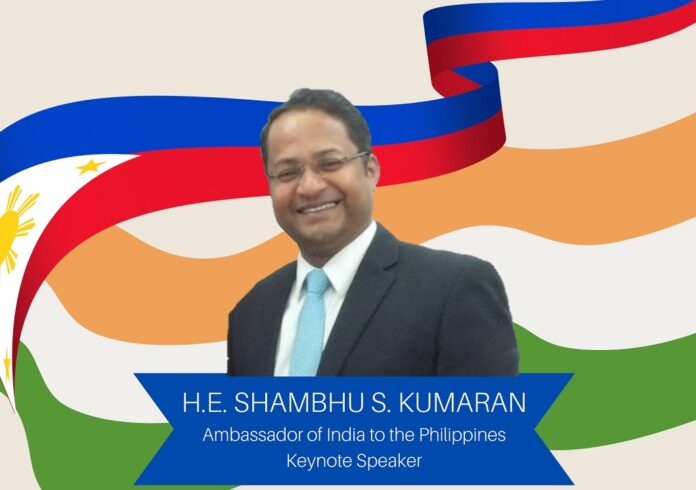 His Excellency Shambhu S. Kumaran will be the keynote speaker in the quarterly event which will also feature the presentation of Oro Chamber President Raymundo Talimio Jr.’s quarterly report and presentation of the Mindanao Food Congress and OROBEST EXPO, two of Orochamber’s scheduled major events for 2022.

In New Delhi, he served as Deputy Secretary (West Europe Division) handling relations with the United Kingdom, Germany, Spain as well as the Commonwealth from 2002-2004. He was Officer on Special Duty (Press Relations) in the External Publicity Division from 2004-2007.

Ambassador Kumaran holds a Bachelor’s Degree in English Literature from Kerala University as well as an MA in International Studies and Master of Philosophy in Diplomatic Studies from Jawaharlal Nehru University, New Delhi.

Earlier, the Indian Embassy agreed to be a Partner Country of the Mindanao Food Congress to be held in October 26-30, 2022 in Cagayan de Oro City with a delegation of at least 10 Indian trade partners and investors to be led by 1st Secretary for Economic and Commerce Mr. Nishi Kant Singh.

India and the Philippines signed a Trade Agreement in 1979. Bilateral trade was slow between the two countries till the late nineties and then posted a positive growth after the deepening relations between India and ASEAN in the context of India’s ‘Look East Policy’’.

The Agreement on Trade in Goods, which was signed on 13 August 2009 between India and ASEAN; and was fully implemented in 2011, helped in increase in bilateral trade. India is part of the Regional Comprehensive Economic Partnership Negotiations (RCEP) which will also support and contribute to economic integration.
Bilateral Trade

Bilateral trade currently stands at US $ 1738.99-M (Exports from India-USD 1287.07mln, India’s imports USD 451.92mln). [Source: MOC for CFY 2019-20 Apr-Jan]. Existing full potential has not been realized and there is need to further facilitate trade between the two countries especially since both economies are growing and are complementary to each other.

Major Indian exports to the Philippines include vehicles, and parts and accessories, pharmaceutical products, reactors, boilers, machinery and mechanical Appliances and parts; iron and steel, rubber and rubber products, electrical machinery, equipment and parts; and TV image and sound recorders.

Kalpataru and Kamani Engineering Corporation are currently engaged in executing transmission line projects in the Mindanao regions of the Philippines. Other engineering firms have been repairing and setting up sugar plants for Philippine companies.

Indian investments in the Philippines are mainly in the areas of textiles, garments, IT, steel, airports, chemicals, automobiles and pharmaceuticals. Major Indian investors include the Aditya Birla Group in textiles & Chemicals (Indo Phil Group), Ispat Group in Steel.

A recent major entrant has been the GMR group Ltd, who in collaboration with Megawide, completed the upgrading and operation of the Cebu-Mactan airport project for the next 25 years starting November 2014.

In addition, GMR also won the contract for expansion of the Clark International Airport. Tata Motors and Mahindra have made their presence felt in the Automobile sector. Mahindra Motors is an active player in the Jeepney Modernization Program of the Department of Transportation (DOTR) of the Philippine Government through the supply of modern jeeps in the local market as the common mode of transportation for Filipinos.

Collaboration in the BPO sector has grown exponentially in the last few years. Several Indian IT companies have already set up BPO operations in the Philippines including WIPRO, TCS, L&T Infotech, Innodata, IL&FS Genpact, Infosys, HIGS (Hindujas), and Tech Mahindra.

Similarly, India has a strong presence in Generic Pharmaceuticals with major firms like Dabur Pharma, Lupin, Torrent, ZydusCadilla, Claris Life sciences having set up liaison offices to promote their products. Lupin has also acquired a stake in a local company.