Cimatu: DENR is more determined than ever to restore Manila Bay 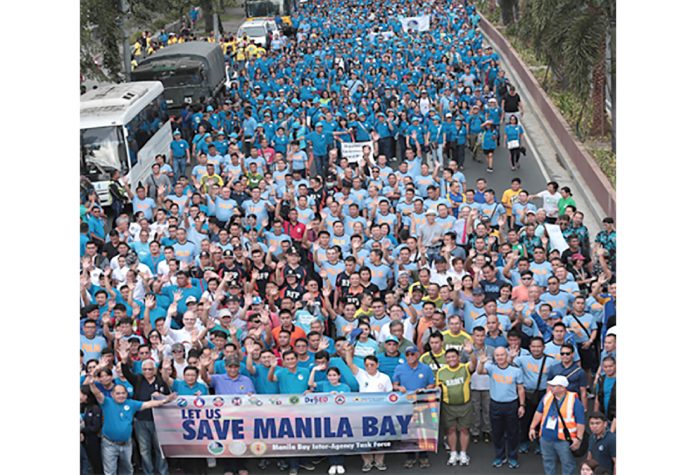 Rehabilitating a heavily polluted water body is proving to be an extremely difficult task, but the Department of Environment and Natural Resources (DENR) under the leadership of Secretary Roy A. Cimatu is more determined than ever to win the so-called “Battle for Manila Bay.”

Cimatu, who chairs the Manila Bay Task Force (MBTF), said that much has been achieved since the Manila Bay rehabilitation kicked off in January this year, but more needs to be done to achieve the ultimate goal of making it fit again for swimming and other forms of contact recreation.

“Our effort to restore Manila Bay is now in full swing and we hope to sustain the momentum of restoring it to its former glory in the coming years,” Cimatu said, noting that the Manila Bay rehabilitation will remain a top priority of the government until 2022.

According to Cimatu, the rehabilitation is currently in its first phase, which is the cleanup and water quality monitoring. The next two phases will be relocation and rehabilitation, and education, protection and sustainment.

As of September 26, the DENR’s Environmental Management Bureau and the Laguna Lake Development Authority inspected 9,708 commercial establishments around Manila Bay. Of this number, 2,478 were issued notices of violations and 107 were slapped with cease and desist orders.

Since the rehabilitation started in January, close to 70,000 volunteers from the National Capital Region, Central Luzon and CALABARZON have collected over 2.3 million kilograms of wastes through cleanups, trash boats and garbage traps.

A total of 70 stations were monitored in the Manila Bay region—31 bathing beaches, 18 river mouths, 16 drainage outfalls and five rivers.

The MBTF has identified 44,125 informal settler families living within the Manila Bay region. While relocation will still be carried out in the second phase of rehabilitation, 51 families—specifically situated along Estero de San Antonio de Abad—were already relocated to Tala, Caloocan City.

In line with this, 547 kilometers of easements have been delineated in NCR and Central Luzon.

To improve the ecosystem in the area, the DENR led the planting of native and fruit-bearing tree seedlings and mangrove propagules.

The agency also intensified its information and education campaign (IEC) on the importance of rehabilitating Manila Bay by conducting over 120 seminars, trainings, and activities participated in by more than 8,100 individuals.

The DENR also came out with 3,574 printed materials, such as on the ongoing rehabilitation, as well as nine information campaigns and 43 updates posted on various social media platforms.

Cimatu said the interventions related to IEC will further increase as the rehabilitation progresses. “We hope that communities will imbibe the knowledge that was handed to them in ensuring the cleanliness in areas they live in,” he said.

The DENR also reactivated its coordination with 12 other government agencies covered by the 2008 Supreme Court continuing mandamus for the cleanup, rehabilitation and preservation of Manila Bay.